Posted at 10:09 am in Movie News by Vladar Team
3 Likes
Share 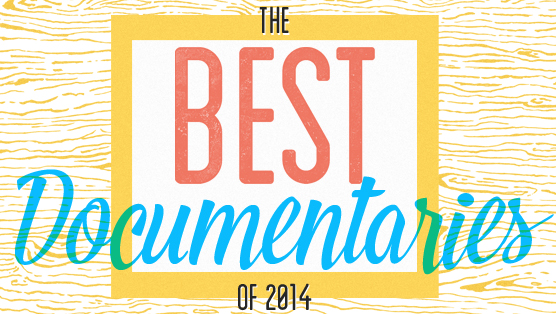 Ebola. Ferguson. The missing Malaysian jetliner. Russian aggression. ISIS. 2014 provided plenty of news stories that are sure to be fascinating subjects for future documentaries, but it provided quite a few outstanding docs for right now, too. Our favorites this year touched on subjects ranging from death metal to national park preservation (both in Africa), from a historic war in Asia to a current one in the Middle East, and from a nearly forgotten photographer to the mot famous whistleblower in the world. Two of our top three films came from two of the greatest documentarians alive—Errol Morris and Frederick Wiseman—but in the end, a much lesser known filmmaker brought us our favorite doc of the year. Here are our twelve favorites.

12. Happy Valley
Why do we pledge allegiance to institutions? Why do we assign positive attributes to unfeeling organizations like sports teams, telling ourselves that our virtue is reflected in their greatness? Amir Bar-Lev’s Happy Valley examines the scandal that engulfed the Penn State Nittany Lions after it was determined that assistant football coach Jerry Sandusky had molested children for years—and that the university (and beloved head coach Joe Paterno) had covered it up. Less a portrait of a sick soul than a chronicling of its repercussions among the Penn State faithful,Happy Valley starkly illustrates what happens when people simply refuse to acknowledge the moral rot in their midst. —Tim Grierson

11. Death Metal Angola
Death Metal Angola’s tone is hopeful rather than nihilistic. This is not a picture about the specters and shades that haunt a corner of the world purged by bloodshed. Rather, it examines how the survivors of those atrocities find common cause through music. You may have figured the musical genre from the title—and if you’re not the metal type, you may also choose to pass the film over. You shouldn’t.Death Metal Angola does more than paint a portrait of hardship for its viewers, or lecture us on regional devastation that isn’t glamorous enough to make the evening news. Its primary concern is the power of art to bring people together, and to give them a filter for their emotions, their struggles, their misfortunes. —Andy Crump

10. Virunga
At Camden International Film Fest, I figured going into Virunga, Orlando von Einsiedel’s excellent documentary about the fight to save a huge national park in Congo, that I was going to get majestically beautiful nature porn, and an impassioned call to action to save a site that is truly a world treasure. Plus cool shots of apes doing cool stuff. And I did indeed get all that. But I got so much more.Virunga is also part history lesson, part investigative thriller, part war movie and part character study besides. It’s exceptionally engaging, exceptionally moving, exceptionally convincing. And those nature shots? Spectacular, too. —Michael Dunaway

9. Citizenfour
Few documentaries have cameras rolling as history is being made. But director Laura Poitras found herself in the middle of momentous times while makingCitizenfour, which takes us behind the scenes as NSA whistleblower Edward Snowden works with (among others) journalist Glenn Greenwald to expose the organization’s systematic surveillance of everyday Americans. From the worried initial meetings in a Hong Kong hotel room to the later fallout across the globe,Citizenfour has the rush of a thriller, humanizing its subjects so that we see the uncertainty and anxiety coursing through them, along with the guts and indignation. —T.G.

8. Actress
It’s perhaps fitting that for a movie as nakedly personal as Actress, I have a somewhat unusual personal story about it. I interviewed doc subject Brandy Burre (you may know her best from The Wire) at the Sarasota Film Festival, and we became fast friends. I learned a lot about her in the months that followed, but nothing could have prepared me for the depths to which director Robert Greene plunges in his documentary about his next door neighbor. In the film, Burre is trying to navigate a return to acting after some time taken off to raise a family, and of course as an actress beyond her teen years, she’s struggling with the industry’s perception of her, and what her new place in it might be, if any. She’s also struggling to make sense of her role in her relationship, as it encounters some rough waters. And she’s doing it all in front of a camera, which raises Heisenberg-esque questions even she may not be able to answer about how much of her journey of self-discovery is organic and how much is prompted by the camera. And does it even matter? Those kinds of epistemological questions lie at the heart of Greene’s work here, and it’s to his great credit that rather than give answers or even ask the questions out loud, he’s quite willing to let the situations unfold in front of us and have us ask the questions ourselves. I’ve never seen a documentary quite like Actress, and now I don’t know if I’ll ever see my friend the same way either. —M.D.

7. Finding Vivian Maier
When Vivian Maier died at the age of 83 in the spring of 2009, those who had known the woman remembered her as a nanny with a humorously stiff gait and a penchant for taking photographs. In the short time since Maier’s death, her narrative has been radically rewritten, her striking street photography celebrated in exhibitions from Los Angeles to London. That such a private, peculiar woman could retroactively be recognized as one of the best photographers of the last 50 years is a testament to the untold great art being made under our collective nose. It’s an enticing story, and it’s breezily told in Finding Vivian Maier, a documentary that examines her path to the posthumous spotlight. —T.G.

6. Rich Hill
Cousins Tracy Droz Tragos and Andrew Droz Palermo grew up in Missouri near the economically depressed town of Rich Hill, which has about 1,300 residents. Their documentary focuses on three young people in Rich Hill, but more broadly Rich Hillis a portrait of poverty and diminished dreams in America’s heartland. Tragos and Palermo force us to see these residents in their unvarnished surroundings, but rather than mocking or patronizingly ennobling them, Rich Hill simply asks viewers to question our prejudices. It’s a modest ambition rendered with great feeling. —T.G.

5. Last Days in Vietnam
Rory Kennedy’s pointed documentary Last Days in Vietnam doesn’t deal with much of that political turmoil that steamrolled the country, or the notion of right and wrong or Red versus Red, White and Blue; instead, it chronicles a very narrow slice of the war—the time after the Paris Peace Accords when the United States had officially exited the war and the ensuing dilemma that faced U.S. forces remaining in Vietnam, particularly what to do about the allied South Vietnamese who faced certain peril at the hands of the oncoming North. What she has rendered is so subtly poignant it sneakily stays with you—the true test of an effective documentary. Her effort sheds new light and understanding on a dark chapter in American history. It also serves notice about a promising filmmaker whose name stems from the American legacy itself. —Tom Meek

4. The Green Prince
Director Nadav Schirman took a gamble when making his third feature: he assumed that his subjects and their intertwining stories were fascinating enough to sustain 90 minutes of what is essentially a documentary about two men talking. He assumed correctly, because The Green Prince builds the same levels of psychological tension one could find in any spy thriller, all the while offering a rare look into the Israeli-Palestinian conflict. It is informative without being didactic, confident without bias—through only two viewpoints presented clearly, Schirman illustrates a magnificently bigger picture. —Jeremy Mathews

3. The Unknown Known
Some reviews of The Unknown Known have expressed frustration that Morris fails to unmask his adversary—that he’s never able to bring Donald Rumsfeld to a moment of soul-searching reflection similar to what occurred with McNamara inThe Fog of War, which won the Best Documentary Oscar. This hardly seems like a failing, though. The Unknown Known isn’t about revelation as much as it is about portraiture. What we have on display here are the workings of a formidable intellect—the film is a case study in unbridled self-assurance. You watch The Unknown Known in a bit of a fog, forced to tip your hat to Rumsfeld’s deft handling of language and meaning. The documentary is a reluctant, disturbing tribute to that mastery. You get the sense that Rumsfeld might have been Morris’s white whale—the one man who could finally be taken to task for the failures of the Iraq War. But even he can’t get Rumsfeld to crack. In a way, that’s fitting: What kind of worthy adversary would Rumsfeld be if he was so easy to catch? —T.G.

2. National Gallery
National Gallery focuses on problem-solving and theory, which proves to be a fascinating juxtaposition. On one hand, a museum is a business that has to worry about economics and marketing—but on the other, its mission is grander, connecting us with our cultural history as well as our political history. But Frederick Wiseman never beats us over the head with these observations: We glean them from the footage he compiles, in which the daily business of running a museum is undertaken with crisp precision.
In this way, National Gallery is itself open to interpretation as much as the paintings on display are. There are far more questions and suggestions in National Gallery than there are firm answers—about the meaning of art or anything else. And in kind, Wiseman (as is his wont) doesn’t show any interest in judging what he sees. As he’s done with several of his recent films, the man lends a sympathetic, slightly detached perspective to National Gallery, portraying a sense of a place, its mission and its struggles. —T.G.

1. The Overnighters
The bulk of The Overnighters is about Williston, N.D. It may not be the most happening city in the United States, but it is one of the fastest growing thanks to the controversial fracking boom and subsequent influx of jobs. Thankfully, Moss leaves the fracking debate for other documentaries to handle. In turn, he focuses on the economically challenged men who seek work in the area, and the harsh realities they find instead.

Rather than the instant riches and six-figure salaries afforded a lucky few, scores of job seekers are left to fend for themselves, living out of cars and alienated by a less-than-welcoming community. The notable exception is Lutheran pastor Jay Reinke, who happily throws open the doors of his Williston church with a housing program dubbed “The Overnighters.” Without the consent of his congregation, Reinke invites these desperate pilgrims to make the building their temporary (or semi-permanent) residence. For Reinke, this radical act of charity is simply the Christian thing to do. For many of his parishioners, it’s an uncomfortable intrusion on their spiritual sanctuary—especially when the local paper prints a list of registered sex offenders in the area and a few of those names are Overnighters. One even lives in Reinke’s own home, with the approval of Reinke’s wife and three children.

The experience of The Overnighters is about so much more than just what does or doesn’t drive Reinke. It’s about what’s happening in America right now, how we can have as many abstract discussions about economics, the environment, crime and punishment, and religion as we want, but that these abstract ideas have real impacts on real people. —Geoff Berkshire